Kristina Bazan, 24 years old, is a multi-faced talent. From multilingual international fashion girl to author and singer, she is widely considered as one of the most famous digital influencers in the world. Originally from Belarus, she’s been living between the United States, Switzerland and Paris.

Among her numerous achievements and awards, Kristina wrote history by becoming the face of L’Oréal Paris and was ranked by Forbes as one of the most influential “30 under 30” personalities of 2016.

Currently, Kristina is focusing her career on music which has been her life long passion. Signed to the independent french music label E47 Records & Live Nation, she is about to launch her upcoming debut EP on October 26, 2018 followed by a first album mid- 2019.

Kristina introduced her music project by launching her first single, “CLOCKWORK”, which reflected her new self, a new vision and creative approach with an aim towards a more introspective, darker and subtle story telling, talking about her past, future and the relationship with the digital world.

After signing with Yves Saint Laurent as their first “beauty-music talent”, linking her love for beauty, fashion and music all together, Kristina released her second single “OLD SOUL” shortly after to share with her audience a more vulnerable side of her life, where work, efforts and passion intertwine in a melancholic ballad.

Her third single “VR” was released Sept 24, 2018. The song would express the ephemeral nature of love in our digitally predominated new world. Where is the limit between reality and virtuality, feelings and illusions?

The song was written and composed by Kristina Bazan was co-produced by Thomas Azier known for his electronic, Berlin influenced work such as the song “Red Eyes” or “Ghost City” and Louis Côté, the executive producer of Kristina’s upcoming album. The influences : disco & glam rock… bands like Goldfrapp with their “Strict Machine”, Blondie’s “Heart of  Glass” or even the melancholic yet sweet first few notes of Chris Isaac’s “Wicked Games”.

The video co-directed by Giovanna Gorassini and Kristina makes us travel into a parallel world where a strange Fish-boy (played by Christopher Michaut) enters a futuristic nightclub. He puts a VR mask on and meets a surreal virtual apparition : a woman who seduces him in a technicolor world. The aesthetic reminding us of Blade Runner, Shape of Water or even some of Lynch’s work, meant to unveil a psychedelic world full of magic and sensuality where seduction and illusion meet. 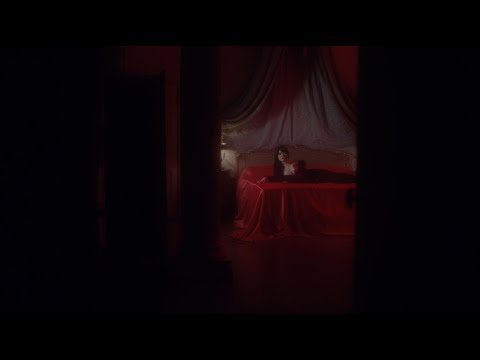