“If Al Capone and Marilyn Monroe had a lovechild, it would be Diana Salvatore. Diana’s sound and style could be described as “Mafiosa Motown”, or “Sicilian Soul”. Watching her perform, one could easily imagine Ms. Salvatore entertaining the rat pack at the Cal/Neva Lodge.

Like a teenaged Marilyn, Diana ran away to the bright lights of Hollywood to chase her destiny as a star. Guided by her undeniable talent and drive, she landed roles in thirteen television series, including the acclaimed American adaptation of the UK smash hit SKINS. MTV’s teen drama Valemont, CTV’s The Listener, Alphas and has currently been cast to play the role of Bobby in BBC America’s newest show Black Orphan. Diana then made her feature film debut in The Killing Moon and was later cast alongside Jennifer Lopez and Richard Gere to play the role of Tina in the Miramax film Shall We Dance.

With her retro sound, and soulful voice beyond her years, Diana was the winner of the BMG/Uomo Music Search. Her first single ‘Baby So What’ was featured on the VIK/BMG artist compilation CD Planet Pop alongside musical heavyweights Destiny’s Child, Britney Spears and N’sync.

Diana even got the chance to perform with some of her idols from the golden soul days when she played along side the Box Tops, Tower Of Power as well as the Temptations. She was even asked to perform for Bill Clinton at the Nelson Mandela tribute. Most recently she performed with the Il Tenori (Italian Tenors) in a string of shows (14) in Niagara Falls to packed houses.

Diana has an impressive sync track record…The provocative track “Dollar in My Jukeboxxx” has been featured in the Chevy Sonic TV commercial, playing in heavy rotation in Canada and the US. She also landed her song “Crazy” on the BBC America show Orphan Black (as well as the O.B. soundtrack). She also has sync placements in an NFL ad, European video games and has worked with Coke and Macy’s.

Don’t be fooled by her cherubic blonde locks and angelic face… Diana Salvatore, like Al Capone, was born to be bad. “ 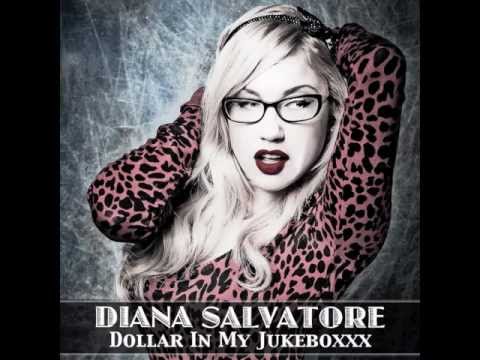